Claim up to €600 in compensation for airline strike.

Ask us:
HOW TO CLAIM airline strike COMPENSATION?

How often do you see such headlines in the press or at check-in at the airport? 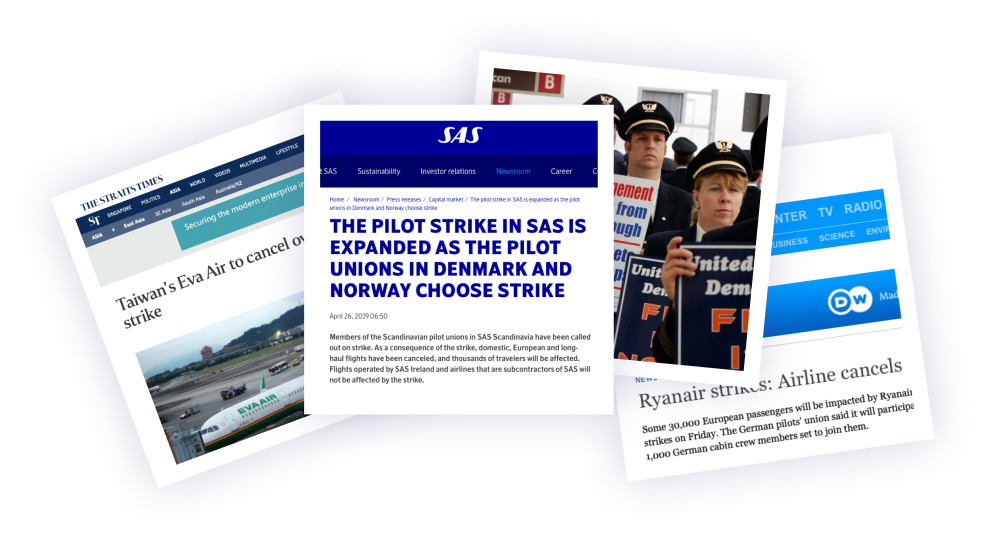 When an airline’s staff goes on strike, it results in heavy flight disruptions.
This greatly inconveniences air passengers. If you have experienced delays due to airline strikes you may be entitled up to €600 in airline strike compensation.

You are eligible for strike compensation if:
You had a flight disrupted by an irline staff strike;
Your flight was either delayed by 3 hours or more, or was canceled less than 14 days before it was due to depart;
Your flight was set to depart from the EU or was on an EU airline arriving in the EU;
You had a confitmed flight reservation;
The disruption occured within the last 3 years;
If you took a replacement flight, your new arrival time was significantly different to your original flight.

Airline staff strikes are strikes involving the employees of the airline carrier, including pilots, cabin crew, airline engineers, and other employees working directly under the airline. If you book a flight which is disrupted because of an airline strike, the airlines may owe you compensation to make up for the inconvenience.

That’s because under a piece of EU law called EC 261, airlines are required to compensate passengers for flight disruptions that they are responsible for. That includes flight disruptions due to airline staff strikes. So if your flight was canceled due to a strike, you may be eligible for compensation under the EC 261 regulations.

What compensation can i get for airline strike?

Sometimes, airline staff strikes can lead to the cancellation of your flight altogether. If you’ve had a flight canceled due to a strike, compensation could be owed! You qualify for compensation if the airline notified you less than 14 days before your flight was due to depart, and they weren’t able to offer you an alternative flight which arrived at a similar time.

When it comes to flight cancellations the airline must offer the passenger
the following 3 choices:

Refund
You will be refunded the full cost of your ticket.

Possible alternative
Аirline must provide you with a new means of getting to your final destination as soon as they can.

Alternative on a convinient date
You can opt to take the alternative transport to your final destination on a different date – subject to seats being available.
APPLY FOR 2 MINUTES AND GET DESERVED COMPENSATION
CLAIM NOW
;